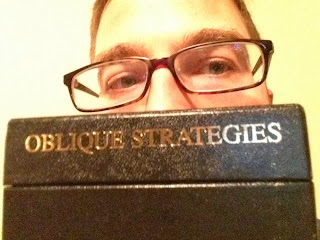 Musician Brian Eno and artist Peter Schmidt produced their first set of Oblique Strategies in 1975. It was subtitled One Hundred Worthwhile Dilemmas and featured a deck of cards with a suggestion on each card. The cards can be used to inspire lateral thinking in any situation that requires problem solving. After a question is posed or problem encountered you simply draw a card and go.

Each card is open ended in its direction. Some are deliberately obscure (Water) while some are more direct (Don't be afraid of cliches). When drawing a card the authors encourage us to trust it "even if it's appropriateness is quite unclear".

Some examples of the strategies:
I received the latest edition of these cards from a good friend for my birthday. They have been very enjoyable to work with and apply to situations. I often pull one out and use it as I explore a concept in improvisation or composition. Sometimes I will draw the card and use the idea when playing through a familiar tune or modal vamp.

Let me try some. To be consistent I'll play over the same vamp. It is a simple I-VI-ii-V progression with bass and drums at a medium swing groove. I did one take and played with each idea for a few minutes. Really though, I could explore these for a long time and in a variety of ways. 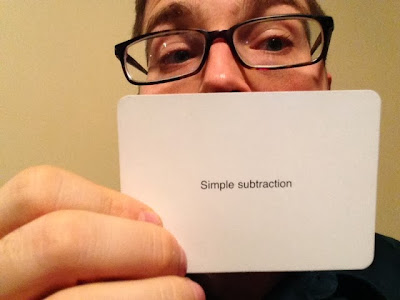 For this one, I decided to improvise lines that begin quite busy. Each bar is filled up. Then I begin to subtract notes upon each pass of the progression. It becomes more sparse as time goes on until I have one note per change. Usually improvised solos start sparse and become busier. This is the opposite and felt interesting. 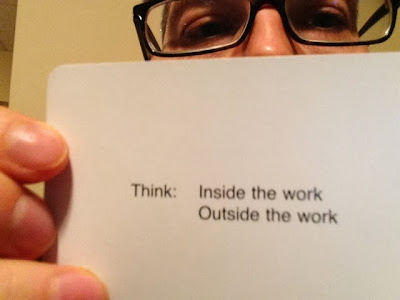 Here I decided to comp. The first passes are very much "inside" the harmony. Then I step "outside" by using ambiguous quartal voicings that move all over the place. I really enjoy basking in the dissonance. However, the trick is to know when to resolve them and to do it with grace. 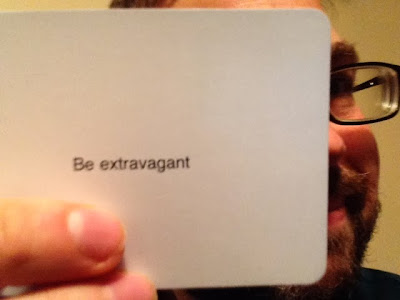 There a few licks that I have tried to avoid lately. In the past I found myself overusing these "sweep" arpeggios. It is a technique on the guitar that helps us get a little closer to what sax players can do. However, they are flashy and quite tempting to pull out. This card spoke to me and said to play these flashy lines with gusto. After playing, I realized that I need to spend more time on these. Not only to clean them up but to find more clever ways of using them.