I would like to occasionally highlight a composer or performer that I think breaks creative ground. So let's start an "Artist Spotlight" series. I will explore the creative process and output of household names as well as more obscure artists. All genres are up for exploration. If you have any artist recommendations, feel free to suggest some in the comments below (or better yet, contribute a guest post!) 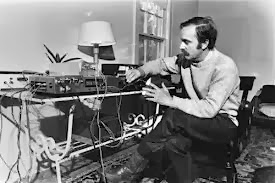 Let's begin with the work of modern composer and tinkerer, Mr. Alvin Lucier (1931).

Lucier's compositions dwell in that twilight area between art and science. I first encountered his work referenced in a psychology of music textbook. His experimental sound installations were cited as examples of a variety acoustic and psychological phenomenon. His work poses many questions. How do we perceive sound? What are ways to manipulate the basic properties of the sound? What are the variety of ways we can manipulate it with technology? Can the brain actually play music? The 20th century had created an explosion of new methods for creating sounds. Composers don't often consider the fields of neuroscience and psychoacoustics when working. Lucier not only considers these fields, he makes them paramount.


Let's highlight his important works. Just a warning before we continue. Lucier is definitely a modern composer bordering on the side of the avant-garde. As you explore the pieces in the post, you may even wonder if what he creates is actually "music". That's fine and we could debate that. But what strikes me about his work is how each piece was created out of a series of "what if" questions (see the previous post). I may not want to necessarily create music that sounds like Lucier's compositions. But I do want to embrace the creative wonder that was the catalyst in bring these experiments to life.

This was the first piece I discovered of Lucier's. I find it fascinating. The casual audience member would probably think they walked into a mad scientist's laboratory. Lucier is seated. For the first few minutes of the performance (which get tedious, feel free to jump ahead in the video), an assistant attaches electrodes to the performer's scalp. These are wired to an EEG (electroencephalography) machine. This machine is used by neuroscientists to pick up electric signals emitted by the brain. These signals vary depending on the specific brain wave states you are experiencing. Human beings always have a combination of brainwaves in our neurology. Delta and theta waves are the lower frequency brainwave commonly found while sleeping or in a drowsy state. Beta and gamma waves are the higher frequencies found when we are cognitively active. The alpha state is often found while relaxing or in a meditative state (note that when musicians enter a state of "flow" they are often in this alpha state). It is this alpha wave that Lucier uses in this composition.After the EEG picks up the alpha brainwaves, Lucier processes that signal by using it to control various percussion instruments on the stage. The strength of his meditative alpha state affect the movements of the mallets mechanized to strike timpani and other assorted instruments. Lucier is able to actually create music with his mind!

This is another one of Lucier's well known works. In this one, the performer records a simple statement into a tape recorder: “I am sitting in a room, different from the one you are in now. I am recording the sound of my speaking voice…” After this statement, Lucier plays back the recording. This playback is then recorded again. Then the rerecorded statement is played back and recorded again. This goes on for 20 minutes. Try to guess what happens? Now watch the performance (feel free to jump ahead to hear the final result).

Pretty interesting, right? I didn't expect that when I first saw this. Lucier's goal in this performance was to isolate the "resonant frequencies" of the room the piece is performed in. The size, shape and reflection of the surfaces in a room have an effect on these frequencies. By the last re-recording of the statement we are left with nothing but a very interesting set of pitches and overtones. This brings to fruition the tail end of his statement: “I regard this activity not so much as a demonstration of a physical fact, but more as a way to smooth out any irregularities my speech might have,” Wild stuff...


The final work further illustrates Lucier's fascination with acoustics. In this piece, he takes a thick piece of piano wire and sets it in motion with magnets and an amplified oscillator. This produces a set of fascinating overtones that constantly change. In his own words: "Music on a Long Thin Wire is constructed as follows: the wire is extended across a large room, clamped to tables at both ends. The ends of the wire are connected to the loudspeaker terminals of a power amplifier placed under one of the tables. A sine wave oscillator is connected to the amplifier. A magnet straddles the wire at one end. Wooden bridges are inserted under the wire at both ends to which contact microphones are imbedded, routed to the stereo sound system. The microphones pick up the vibrations that the wire imparts to the bridges and are sent through the playback system. By varying the frequency and loudness of the oscillator, a rich variety of slides, frequency shifts, audible beats and other sonic phenomena may be produced."

Interesting music. Perhaps not something you will rush to put on your Ipod, but hopefully something that gets you thinking a little bit about sound and its role in the creative process.